Who’s afraid of Jordan B. Peterson?

The far left, far right, and the “woke” crowd aren’t fans for sure.

Peterson has clashed with these folks on a variety of political and cultural issues. He shot to fame when he stood up against compelled speech. He lambasted the “pseudo-moralistic stances” of social justice activists. Also, who can forget that (in)famous interview he did with Cathy Newman?

Peterson is staunchly against identity politics and political correctness. He gets a lot of hate for being outspoken about his views. In fact, Peterson once remarked that he has been called almost every pejorative, except paedophile.

At the same time, Peterson is a source of inspiration to millions of fans. Men and women alike. All over the world.

Peterson is a clinical psychologist and professor of psychology. He speaks about many of the challenges that modern society grapples with. Gender equality. Political polarisation. Anxiety and depression. Relationships with the opposite sex. Plus, so much more.

To fans, Peterson is an “Internet Dad”. He speaks from a deep well of knowledge and experience. He helps them successfully navigate the chaos and harsh realities of life. Peterson is also brutally frank about the moral failings he sees in people.

Failings that people know, in their hearts, are holding them back from achieving their full potential.

What Peterson taught me

I first came to know about Peterson from a friend. My friend had recently begun picking up his life, after drifting around aimlessly for years. He said that Peterson was an inspiration.

Intrigued, I looked Peterson up. I watched the Peterson-Newman interview and got even more intrigued. I borrowed his book, 12 rules for life, from the library and devoured it in two weeks. Then, I watched more YouTube videos of Peterson’s lectures and interviews. 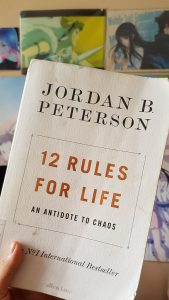 Having read and watched a lot of Peterson, I’ve been thinking about what are my top takeaways from him. It’s hard to distil a few key learnings, from across Peterson’s vast body of lessons, but here’s what I’ve gleaned:

Peterson on suffering and failure

All humans are guaranteed a good dose of suffering. If suffering is not happening now, then it will, sooner or later.

Terrible suffering happens, even to good people. This harsh reality of life can be horrifying and unbearable. Enough to corrupt people, and drive them to nihilism, vengefulness, and suicide.

Sure, most people don’t react to suffering in such extreme ways. But Peterson observes that people often make their suffering worse by their ignorance and malevolence. They pursue impulsive pleasures, fritter their time away, refuse to grow up, and more.

But everyone knows, deep down, that they can’t escape the consequences of their moral failings.

They despair about their failure to seize the opportunities before them. They berate themselves for their uselessness. When they let their lives go off the rails, they know, all too well, that they’ve hurt the people who love them.

Peterson on meaning and responsibility

Peterson’s recommendation is to “accept the terrible responsibility of life with eyes wide open.”

Rise above despair and the victim mentality. Voluntarily confront the undeniable suffering and harsh realities of life. People also need to acknowledge the moral failings that contribute to their suffering and see that they’re not where they could be.

Then, face the demands of life with courage. Find meaning by taking up responsibilities. These include building competence, becoming a reliable person, and caring for the self.

Meaning can also be found by answering the call to adventure and venturing out of comfort zones. In the course of adventure, one uncovers hidden potential within the self. Peterson is a huge believer in human potential. “The world needs you even if you don’t need it” he insists.

So, start taking personal responsibility. The weightier the responsibility, the more meaningful and engaging life will be. Peterson is adamant that people take responsibility for their lives first, before they try to change the world.

Peterson on truth and courage

Towards the end of one interview, the journalist asked Peterson how he’d like to be remembered.

His response was a simple “as someone honest.”

Peterson considers honesty so important that he dedicated a chapter to it in his 12 rules for life book. That’s rule eight, “Tell the truth — or, at least, don’t lie”. My favourite rule.

The idea is to act in truth as far possible. Sure, it can be hard to know the truth for various reasons, like ignorance and confusion. But the least one could do is to avoid lying. Lying weakens the self. When people act in a way that is at odds with how they truly feel, or in a way that denies reality, they cannot solve challenges in an optimal way.

Peterson recommends that people articulate what they believe to be true as carefully as possible. Then, accept the outcome. “Assume that your truth, as lived and spoken, will produce the best possible outcome” he advises. “It’s an act of faith. But so is every other way of being.”

Being truthful takes courage. There is a risk of making someone upset or angry when they know the truth. There may even be social repercussions.

But acting in truth also produces good and order. Forthright communication about problems can heal relationships. When one is honest, people know that this is a person who can be counted upon during a crisis. “It’s better to live courageously than cowardly,” Peterson insists. “Better to live in truth than in deceit.”

What all these mean for me

After my exposure to Peterson, I noticed changes in my behaviour. I’m waking up earlier. I slack off less and have become more productive. There’s a stronger sense of purpose and fearlessness. I plan to keep at all these and do better.

Inspired by Peterson, I have also decided on my two themes of 2021: courage and competence.

To be courageous is to seek adventures that lie beyond my comfort zone and take on the challenges that I will inevitably confront. All while staying true and honest to myself.

Competence is honing my skills in the activities that are meaningful to me, especially my art. I want to level up my art and get recognised more. Competence is also about building myself up to be someone who can be trusted and relied on during difficult times.

It’s almost the end of February. One-sixth of 2021 is over, already. But I haven’t been idle; I’ve been setting goals for 2021 based on my two themes. I’ve taken action on some of these already and the results have been encouraging.

Thank you, Jordan B. Peterson. Congratulations on the launch of 12 more rules of life today, I can’t wait to read it! 😊